The board game Terraforming Mars from FryxGames in Sweden has been a massive success since its original 2016 release. 2018 saw the release of a localized and highly successful Nordic version of the game, translated by the Copenhagen-based agency Character Localization and Publishing. Today Character and Asmodee Entertainment are delighted to announce that work is underway on a Danish translation of the first Terraforming Mars novel, In the Shadow of Deimos, with publication set for later this Autumn. 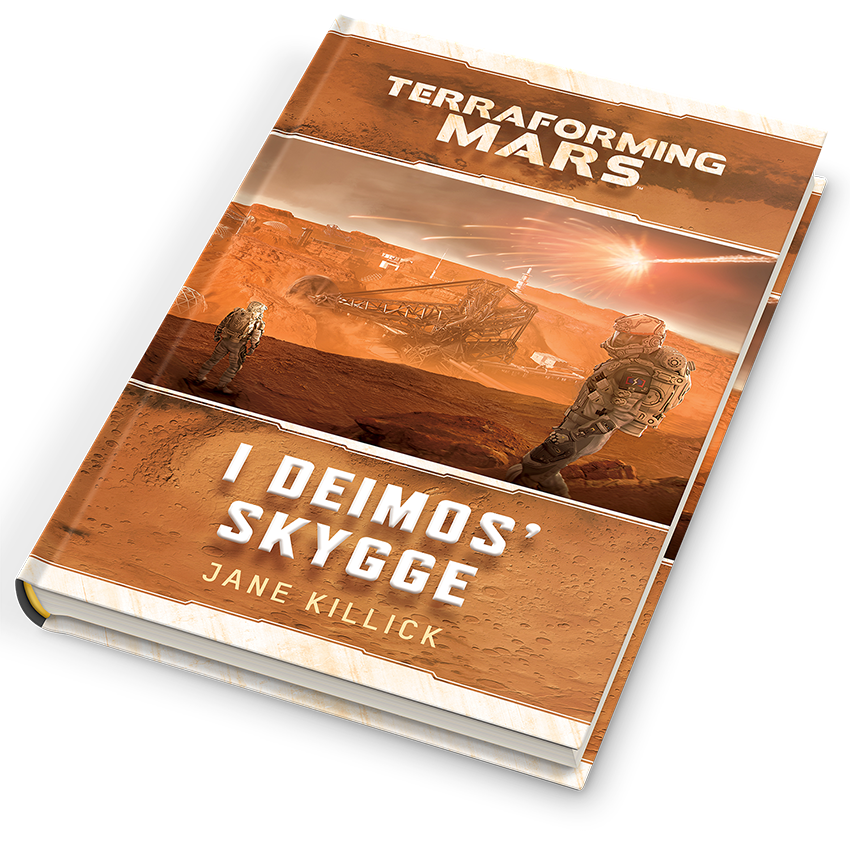 The English-language novel  will be published this September by Aconyte Books, the fiction imprint of the game’s distributor, Asmodee. Author Jane Killick is a British novelist and journalist who juggles working for BBC Radio with a lifelong passion for science fiction. Alongside several series of original SF novels, she has also written numerous behind the scenes books, including a guide to TV show Red Dwarf, and a series on Babylon 5.

In the Shadow of Deimos is set among the colonies on Mars, in the year 2316, where the recently created Terraforming Committee arbitrates the dramatic development of Mars by powerful rival corporations. When a rogue asteroid crashes into a research centre and kills its lone technician, their investigation reveals a multitude of motives, until a corporation insider stumbles on a dark conspiracy. Two Martians with very different agendas must navigate a trail of destruction and treachery to uncover the truth and expose those responsible. But as lines blur between progress and humanity, Mars itself remains the biggest adversary of all.

“I am delighted that we can announce our partnership on this novel today. Character are experts in their field and with the popularity of the Danish-language edition of Terraforming Mars in Denmark I’m confident that many fans of the game will be equally delighted to read the novel in their mother tongue,” says Alexander Thieme, Asmodee Entertainment’s Licensing Manager for the project.

“The Terraforming Mars board game is incredibly popular, with a great base game and excellent expansions added after its original release. The Swedish Fryx brothers managed to create something really special with this game: It quickly turned into a cultural phenomenon rather than ‘just’ a game, as it is both highly topical in terms of climate concerns, scientific progress, technological advancement and the exploration of space and very accessible to inexperienced board game players despite its depth and variety. The game has drawn in a vast amount of new players, and it is only natural that the Terraforming Mars universe is now being expanded into the book format, as there are many stories left to be told in it. In the Shadow of Deimos feels like a natural new expansion of the game in book format, and we are very excited to bring this new Terraforming Mars experience to all the people who enjoy the Danish version of the board game,” says Morten Skovgaard from Character Localization and Publishing.

“We are very happy with adding books to the Terraforming Mars brand. Especially when they bring the stories behind the game to life, as In the Shadow of Deimos does: a riveting story, inspiring settings, and a believable future,” says Jacob Fryxelius from FryxGames, creator of Terraforming Mars.